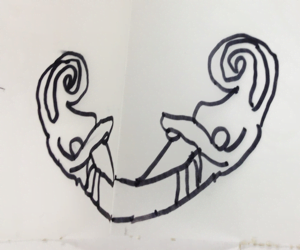 Sixty children from year four classes at Wendell Park Primary School, Shepherds Bush, came in two groups to nearby Kite Studios to do workshops on Monday 22nd February to make their own Viking treasure using art to enrich and link to their academic curriculum.

A good starting point for learning is to share experiences and start with existing knowledge. The pupils brainstormed in pairs to produce a pool of knowledge to share with the group which included Scandinavia and Sweden, long ships, male jewellery wearing and eating blood sausages. A guided class discussion built up these layers of knowledge into a bigger picture and then the children were ready to look at some pictures of Viking hoards. Ooh Treasure – a sharp intake of breath. There was excitement in the air. The children were ready.

Rising to the challenge

The pupils explored the concept of symmetry inherent in Viking jewellery by drawing half of their design onto folded tracing paper, then transferring onto the back and opening out to reveal symmetrical designs. After a bit of practice everyone got this and there were some startlingly Nordic looking designs.

Children learn by making their own decisions and problem solving without fear of mistakes and getting it wrong. 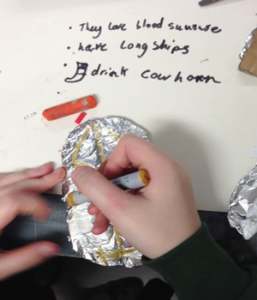 Art is all embracing and there are no such thing as mistakes as everything can be incorporated into the process. The big challenge here was to transform hand drawn symmetrical designs into 3D objects: jewels in relief on cardboard.  First selecting their own materials from a selection of pipe cleaners, straws, tissues paper, material and then problem solving as to how to mould these materials to make their jewellery design. 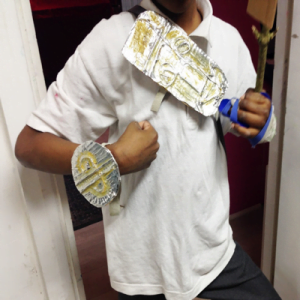 Then the pupils moved on to making their creations sparkle: they had to cover their raised design with silver paper and press it down to create an embossed jewelled effect. The effect was further added to by adding detail with pastels and blunt pencils.

Role Play and developing understanding the function of Viking art

Then came the exciting part how were they going to wear their jewellery? Was it to be an amulet, belt buckle, protective shield, brooch or spear? They were given a choice of leather or reed straps and shown a variety of ways to attach them.

Now it was time to become a Viking warrior!