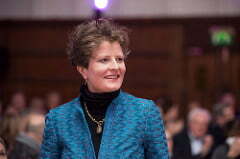 Auriol has won a Civic Award in the Contribution to Arts and Culture category for Hammersmith and Fulham!
We are thrilled that Auriol’s work since 2005  at Kite Studios has been recognised as making a valuable contribution to the local community.
“A big thank you to the Kite Studios team, students, adults and parents who’ve supported us over the years.”
Making art accessible for all, whatever their background, ability or age, has been the core ethos of Kite Studios ever since it was founded.
Many pupils who started back in 2005 in our Art for Little Ones classes for toddlers have continued their creative journeys all the way through to post-16 and beyond. We can now see them launched in their creative careers in architecture, fine art and design, or simply thriving from developing their creativity to apply to whatever field they are in. We have also had a number of those pupils return for work experience and employment.
Kite Studios has always been inclusive and continues to learn and grow as an organisation to support young people with special needs and families who would otherwise find it difficult to access art education.
Auriol was presented with her award by Stephen Cowan at the Civic Awards Ceremony held on the 1st March at Hammersmith Town Hall. She surprised and thankful to have won the first ever LBHF Civic Honours Award for Contributions to Art and Culture, chosen from over 400 entries across several different categories. It was a great honour. 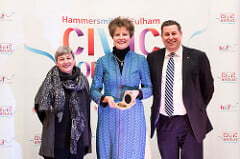 At Kite Studios we firmly believe that creativity is at the core of everything.
Over the years we have developed our art classes to focus on developing creativity and applying it in all walks of life. The work we’ve done with Wendell Park Primary school highlights how developing creative skills in children allows them to flourish in other subjects from maths to science and history. Creativity does not only have to be visually focused.
“It is wonderful to have over a decade’s worth of hard work and being a creative oasis for everyone, whatever age, ability and background, to be celebrated,” said Auriol, founder of Kite Studios.
Congratulations to the other nominees who were shortlisted for the Civic Award for Contribution to Art and Culture;
Madani Younis, artistic director of the Bush Theatre,
Rosie Whitney-Fish, artistic director of DanceWest
Wolfgang Stange, founder of AMICI Dance Theatre Company.